How Sustainable is PLA?

“Is PLA is sustainable?”

“Is PLA is biodegradable?”

“Is PLA is compostable?”

“Is PLA is recyclable?”

As a brand of 3D printer filament, questions like this are received on an almost daily basis. As sustainability is central to our business model and ethos, we feel it is our duty to interrogate the cliché, environmental claims.

This post seeks to therefore explore the credibility of each of the four key environmental benefits of PLA. 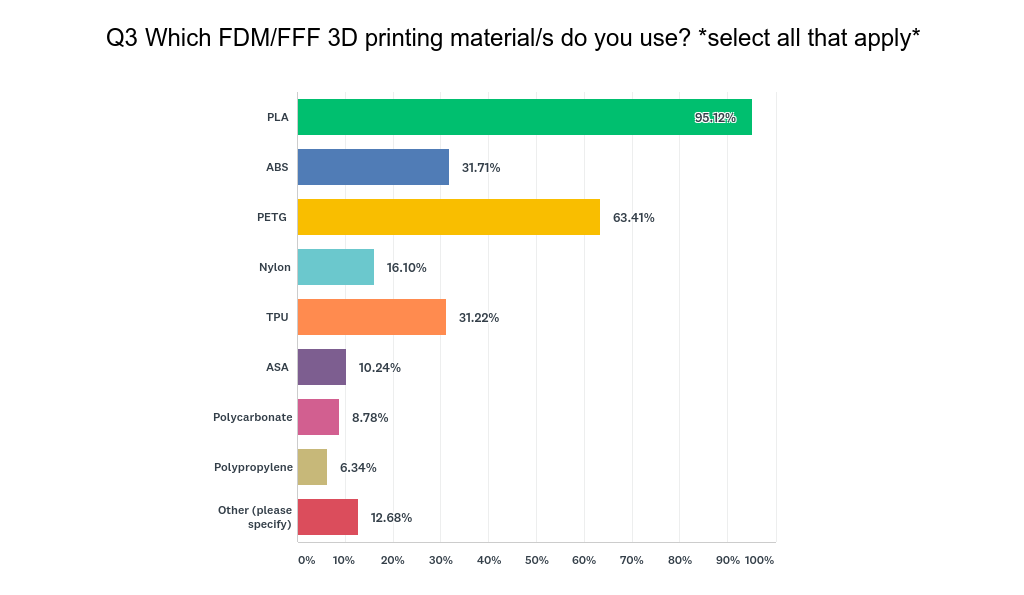 Fused Deposition Modelling (FDM) is one of the main types of 3D printing. FDM is an additive manufacturing process in which a thin filament of plastic wire feeds a 3D printer; the print head melts it and extrudes it onto a build plate.

PLA is the most popular 3D printing filament material – as exemplified in a recent survey which shows that more than 95% of 3D printing users use PLA.

However, bioplastics – such as PLA – compete for land with food crops. According to the Guardian, bioplastics need several million acres of farmland, which reduces the space available for food crops growth. However, this problem may be over-stated as according to an estimation by European Bioplastics, “… the land area used to grow biomass for the production of bioplastics in 2017 corresponded to 0.016 percent of the global agricultural area, 97 percent of which are used to grow food and feed. Even with the predicted high growth-rates… the land-use share would only slightly increase to up to 0.021 percent of the agricultural area by 2022.”

While biodegradable materials are designed to break down within landfills, compostable materials require special composting conditions.

Whilst this proves PLA is biodegradable / compostable, again it’s a feasibility versus practicality argument. The Guardian found that only a handful of anaerobic digesters exist in Britain, and even then without a centralised collection infrastructure the average consumer is unable to access such facilities.

As concluded in a 2016 academic paper, “…mechanical recycling presented the lowest environmental impact…”. The (mechanical) recycling process of PLA includes the following steps: separation, grinding, washing, drying, extrusion, cooling, granulation and sieving of recycled PLA.  Whilst recycling PLA is certainly feasible it is not necessarily practical. Because PLA of different origin than regular plastic, it must be kept separate when recycled, otherwise it can contaminate the recycling stream – thus making such streams unsaleable. As the BBC stated in February 2019, the technology for plant-based compostables has come so far that it is hard to tell which is plastic and which is bio-plastic (PLA).

Whilst there are elements of greenwashing when it comes to the marketing of PLA, the evidence still suggests it is a step in the right direction in our attempts to reduce the consumption of non-renewable petroleum. Not only is PLA plant-based, but [according to Natureworks] it also emits a fraction of the greenhouse gases compared to other plastics, as well as much less energy intensive.

Specific to 3D printing, the improvement of 3D printing hardware and slicing software is reducing print failures and thus wastage. Of course the ease of 3D printing will still breed masses of unwanted prints, however, low cost, upcycling solutions do exists, as we discussed in our recent blog: What to do with Failed Prints and 3D Printing Waste.

In order to work towards a circular economy framework for bioplastics such as PLA, investment is required to catalyse technological innovation in order to develop a sustainable recovery infrastructure for bioplastics such as PLA. Once achieved this will give rise to further landfill avoidance and an increase in PLA recycling – be it mechanical recycling or composting.

Whilst at its core 3D printing is fundamentally less wasteful than traditional, subtractive manufacturing methods, academic research has found that “material sustainability is an issue that can no longer be ignored due to wide adoption of 3D printing”. The use of plastic as a feedstock has the potential to exacerbate the global plastic epidemic unless we can find a sustainable solution.

Filamentive, a brand of high quality 3D printing filament, with a primary objective to drive environmental change in 3D printing.

Recycled PLA – sourced from post-industrial extrusion waste – is used in lieu of virgin PLA where possible. In 2021, 87% of Filamentive PLA was produced from recycled material.

This site uses Akismet to reduce spam. Learn how your comment data is processed.